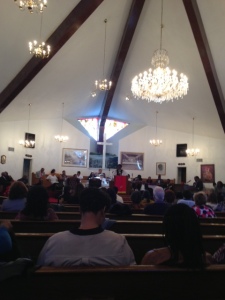 Chances are, the only people who read a first blog post are Mom (proudly), Significant Other (dutifully) and Strangers in Countries You Can’t Spell (because that’s just the way of the internet).

That said, there’s still such pressure for a first post to deliver. Writing for a new publication, whether it’s a newspaper that circulates hundreds of thousands of copies or even just the latest social media fad, has always made me feel a bit exposed. I want to look good, but I never want it to seem like I’m trying too hard.

With that in mind, I figured I couldn’t go wrong with my recent Martin Luther King Jr. holiday weekend encounter with Al Green, the Reverend Al Green.

A bit of back story: My close friend and former Florida newspaper colleague recently graduated from the FBI Academy and was assigned to Memphis. Yes, my friend left news and became a special agent, while I left news and bought a WordPress page.  Anyway, I had gone to Memphis once back in college but didn’t remember anything too thrilling. I guess if watching ducks cross a hotel lobby is one of the top tourist attractions then — well, Dorothy, you’re probably no longer in Conde Nast’s favorite city in the world.

But way down in the dregs of TripAdvisor’s Memphis Attraction list (OK, it was the bottom of the first page, but we’re a two-second attention span society), I found Full Gospel Tabernacle. People had even reviewed the church services. At first, I thought, how tacky! Then I pondered writing a review of all the Roman Catholic masses I was forced to endure as a child. But I pulled my own two-second attention span back to the task at hand: Could we actually go see the Rev. Al Green sing gospel?

Reviewers complained about being shaken down for cash during the offering, about having to wait hours before Al Green showed up and about his lackluster sermon (really, you came for his sermon?). But on one point, they all seemed to agree: the music was legit.

Full Tabernacle is an unassuming, single-story church nestled in a neighborhood a few turns away from Graceland. A man wearing a full suit and an elastic Memphis Grizzlies bowtie greeted us as soon as we stepped out of the car, eagerly asking where we were from. We made our way inside and sat in a pew toward the back, a few rows in front of some German college students with Nikons around their necks. A security guard took her seat in a folding chair along the wall. And the music started.

A full choir stood front and center on the altar, beneath a painting of the Last Supper, which hung beside a portrait of Al Green. A full band – keys, percussion, electric guitar, the works – played to the right of the singers. An elderly woman in a plum-colored skirt suit danced so feverishly in an aisle that the gray curls piled atop her head shook violently, and a younger woman rushed to fan her with a program. A white woman up front kept her arms in the air for entire songs, as if raising the roof for Jesus over and over.

The band and choir served as the perfect opening act to work everyone into a froth before Al Green walked in. He flashed that boyish smile, which makes him look decades younger than his 66 years (or maybe platinum record sales will do that). He took his time finding his way to a chair at the front of the choir, a chair decorated with crushed purple velvet and cursive gold lettering that read “Bishop Al Green.”

He didn’t just sing; he testified with music.  And the people clapped. They nodded. They punctuated each line of verse with “yes!” Affirmations for Jesus or for Al Green, it didn’t matter. Every time he started to preach, it seemed, he changed his mind and instead launched into song. I’ll give an Amen to that. And when it came time for the offering, you could walk right up to Al Green and shoot him a smile right back. Hands down, best $23 we spent in Memphis.

My advice the next time your friend becomes an FBI agent and you plan a trip to go see her in Memphis: Skip the ducks, and go to church instead.